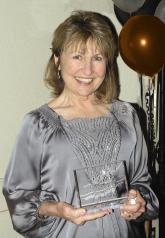 Communications professional Karen Terrill received the prestigious Paul B. Clark award from the California Association of Public Information Officials (CAPIO) at its recent annual conference in Palm Springs. Terrill was honored with this top award for her outstanding service to the public, her profession and the CAPIO organization. “Karen has contributed tremendously to the profession and to CAPIO and was incredibly deserving of this award,” said CAPIO President Krista Noonan. “She definitely encompasses all the CAPIO Board of Directors looks for in bestowing the award to an esteemed colleague” Terrill has more than 35 years experience in serving the public as a PIO and working with the media. First, serving as a broadcast news anchor and then at CAL FIRE and now through her own company, Media Survival Group. While spending the first 15 years of her career in broadcast, Terrill developed an admiration for the work of PIOs. She watched in her newsroom as reporters treated a story differently when they respected the PIO behind it. She would look back on those instances years later when she decided that PIO training was her true calling. After leaving the broadcast arena, Terrill served as the chief PIO of CAL FIRE for more than 20 years. She began to teach and accept speaking engagements to help other PIOs learn the ropes. Humbly, she would admit to them that “no one is born knowing this stuff” and “don’t make the same mistakes I made.”

Through her career, Terrill has worked diligently to form relationships with other public sector agencies and create innovative PIO crisis communication programs—which have even been endorsed by the US Department of Homeland Security. PIOs who have been trained through Terrill’s programs have gone on to respond to important events like Hurricane Irene and the Crescent City Tsunami. Terrill also created the pocket-sized award-winning Go Book—which serves as a checklist for setting up and operating a NIMS compliant Joint Information System/Joint Information Center. The Go Book has been used nationwide as a tool to support and document a jurisdiction’s efforts in crisis response. In addition as a lead PIO for CAL FIRE, Terrill created several award-winning CAPIO programs, such as the Tahoe Re-Green, which encouraged public response to clear dead and dying trees and replace them with new, appropriate tree species in the Lake Tahoe area. She served as lead PIO for several multi-agency programs, such as the Boarder Agency Fire Council that created an international land management/public safety agreement, which remains intact today. Terrill has been an active member for nearly 10 years and has been a speaker at previous CAPIO conferences, sharing her knowledge of crisis communications and communications law. She has also served as a sponsor at several CAPIO conferences. She has also been a trainer with the California Specialized Training Institute, including their inaugural training program in 1986. And, she has taught mass media at UC Davis. Through her career, Terrill has been lauded for her work and has won more than 40 awards for writing and communication program development. In addition to CAPIO’s Paul B. Clark award, she has also received a lifetime achievement award from the California State Information Officers Council.