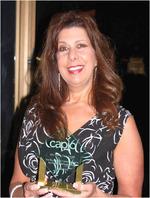 Communications professional Gail Ortiz received the prestigious Paul B. Clark award from the California Association of Public Information Officials (CAPIO) at its recent annual conference in Sacramento. Ortiz was honored with this top award for her outstanding service to the public, her profession and the CAPIO organization. ”Gail has contributed tremendously to the profession and to CAPIO and was incredibly deserving of this award,” said CAPIO President Jenny Peterson. Ortiz has more than 30 years of experience in public relations and government communications. She is currently the communications manager for the City of Santa Clarita, one of California’s top 25 largest cities. She has held the position for the last 21 years. She has also served as the media manager at Providence St. Joseph Medical Center and as the public information officer for Lakeview Medical Center. As the first public information officer for the city, Ortiz worked to build the communications department up in to the award-winning department it is today. Her responsibilities have included public affairs and marketing roles, in addition to traditional communication functions. She has helped the City of Santa Clarita achieve regional and national media attention with creative programs, media and special events, including the “Hairdresser’s Luncheon,” ”Milk and Cookies with the Mayor,” the ”Healthy Santa Clarita” program, and the ”Extreme Neighborhood Makeover” program. As technology has changed the world of public relations, Gail has been at the forefront of emerging technologies in order to communicate with the Santa Clarita community. The city was one of the first in the state to adopt social media, including a city Facebook page, Twitter accounts and an online blog called Santa Clarita City Briefs. During the last 20 years, Ortiz worked diligently to support the CAPIO organization, serving both on committees and the board of directors. The quality of Ortiz’s work has been recognized by CAPIO through its Excellence in Communication Awards. In addition, she has received numerous SAVVY Awards from the City/County Communications and Marketing Association and the League of California Cities Helen Putnam Award of Excellence. Ortiz was also instrumental in the creation of the Santa Clarita Valley Public Information Officers’ group, which has been around for more than 10 years and addresses regional issues of crisis communications, intergovernmental relations and mutual assistance. The group boasts more than 50 members in a 200-square mile geographic area and includes public information officials from major agencies in the area, including health care, utilities, county and state government, and fire and law enforcement. In her current role, Ortiz has mentored more than 15 young professionals with a hands-on internship program that readies graduates for an entry level communications job. Many of Ortiz’s mentees have gone on to secure communication jobs in the private and public sector. Ortiz is also actively involved in her community and serves as the vice president for the local Domestic Violence Center, where she has been on the board for seven years. During her tenure at the Domestic Violence Center, she created “Boys Night Out,” an annual event that raises thousands of dollars for the center as well as awareness among community men for issues related to domestic violence. She has also helped balance the agency’s budget, hiring a new executive director and helped create a scaled down budget with reserves for the non-profit. In addition, she serves on the advisory board for the Santa Clarita Valley Family Promise, an organization that provides shelter and services to homeless families. Previously, she has served on the board for the Child and Family Center of the Santa Clarita Valley for eight years.