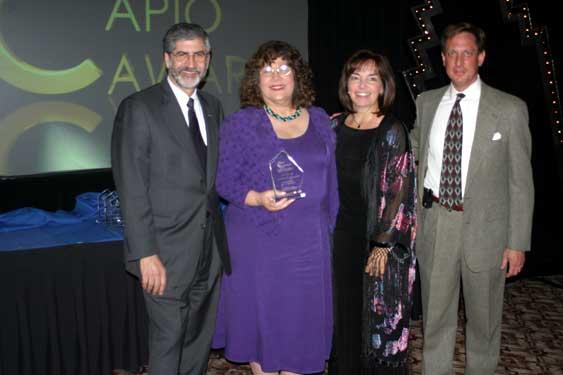 Ann Erdman, PIO for the City of Pasadena and 2004 Paul B. Clark Award winner, has been named a lifetime member of CAPIO. Honored for more than 20 years of excellence in public information, Ann joins just 17 other members throughout California to have received the coveted Clark Award, named in the commemoration of CAPIO founder and former City of Carson PIO, Paul B. Clark, who passed away in 1987.

“Receiving CAPIO’s highest honor was a complete surprise,” said Ann. “I am grateful to those who nominated me for my 25-year body of work, and to the CAPIO Board of Directors for selecting me.”

Ann has managed the Public Affairs Office for the City of Pasadena since 1991. She and three employees handle media, public and community relations for the city while serving the communication needs of the mayor and city council, city manager and city departments. In addition she serves as city spokeswoman to the media, oversees programming for the government-access television station, and is the editor of the community newsletter Pasadena In Focus. Ann works with public and private school groups of all ages, helping them learn how local government works, allowing them to experience first-hand how it feels to be a city leader and decision-maker through role-playing in the Council Chambers at City Hall, and developing “scavenger hunts” so children can appreciate the history and architecture of Pasadena City Hall.

Photo: Longtime CAPIO members Judy Rambeau, Scott Summerfield and Tom Manheim, all past Clark Award winners, presented a plaque of achievement to Ann Erdman (with plaque) during the 2004 Conference and Awards Ceremony in Monterey.