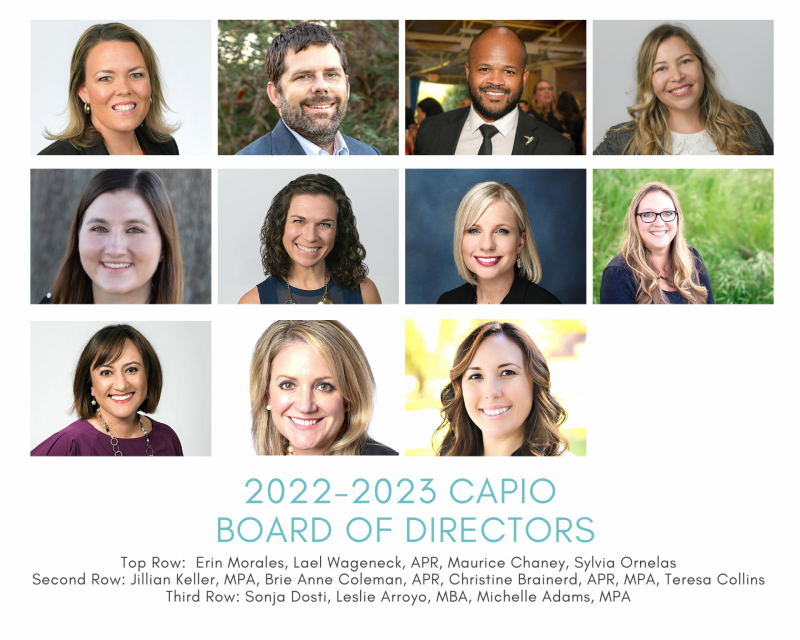 CAPIO is pleased to announce the appointment of board members assuming three positions due to mid-term shifts.  While this is a rare occurrence, it can happen due to any number of things including promotions, job transitions or new responsibilities that conflict with a position.  Because we will be holding an election in just four months, the Board has appointed Board members to assist in finishing out the current terms through the end of April.  These positions will then be up for election.

Secondly, we are excited to announce the appointment of Jillian Keller to the role of V.P. Awards.   Jillian supported the last two awards programs as a key committee member supporting the planning and creativity of the awards events.  She will lead a team to oversee the awards program and plan the two 2023 Awards events in Monterey during the May 1 – 4 CAPIO Annual Conference.

Finally, we want to welcome Brie Anne Coleman as V.P. Communications.  She was actively involved on the communications committee for several years and also supported key projects during our 50th Year Anniversary celebration.  We want to thank Margie Otto who has held the position for a year and half and has helped improve our strategic vision and communications structure within CAPIO.  Due to a work promotion and some unexpected family needs, she is taking a step off the board for a time.  Thank you, Margie, for continuing to be a voice for CAPIO!

Finally, due to a job promotion, Grace Cardenas will be stepping off the board for now.  We want to thank her for her commitment as Southern California Regional and Membership Chair for two years and her partial term as Website Chair.

Board positions are two-year terms except in the positions of Incoming President, President, and Past President which are one-year terms.  The 1-year term above indicates a transition mid-year so the initial term is shorter, but will go back to a two year term during the following election cycle.

If you’re interested in joining the board, be sure to email info@capio.org at any time.  You will be added to an interested parties list and you can submit your name for a nomination when the call for nominations come out at the end of the year.