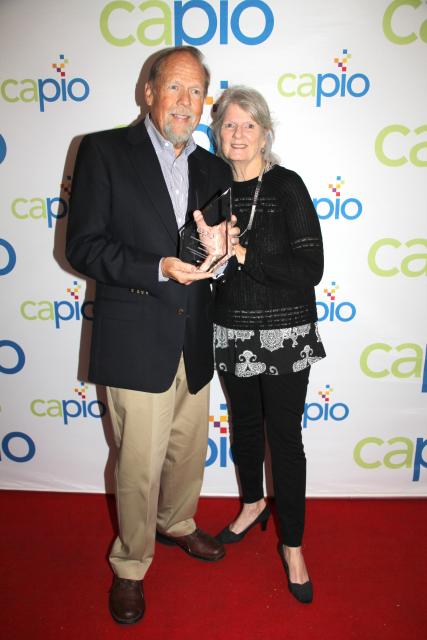 “Crisis communications is core to our jobs as government communicators, and Frank was a visionary in understanding how crucial effective communication with the media and the public is during times of crisis and the importance of training on this topic,” said Christine Brainerd, APR, CAPIO president and communications manager for the City of Folsom. “CAPIO is pleased to honor his legacy in the field of crisis communications by bestowing him with the first Frank Potter Cowan Crisis Communication Leader Award.”

Frank was honored with the inaugural award bearing his name in honor of his leadership in the field of public-sector crisis communications where he is well-known for founding the Crisis Communications Management curriculum for the California Specialized Training Institute (CSTI). CSTI, which is run by CalOES, provides crisis and emergency management training for all phases of emergency management.

“I am truly honored to be recognized with CAPIO’s first-ever Crisis Leader Award,” noted Cowan. “My work in the profession was driven by a passion for ensuring all crisis communicators had the tools they needed to effectively reach their communities in times of crisis. Knowing that so many of my fellow communicators have gained these valuable skills through crisis courses I developed more than 30 years ago and have continually updated to incorporate evolving technology, means the world to me.”

Cowan created the Crisis Communications Management training at CSTI in 1984 after seeing the need for crisis training for public information officers, who along with public safety personnel, are often the first responders in times of emergency and crisis.

The goal of Cowan’s CSTI crisis curriculum was to ensure that communicators on the scene of a crisis had the skills and training they needed to effectively and transparently provide information to the public and media in times of an emergency.

One on the hallmarks of Cowan’s crisis training was his emphasis on creating a PIO Team to work as a unit during times of crisis in order to effectively manage the demands of the media and the public. At CSTI he created a four-level crisis communication training program filled with entertaining and engaging exercises, brilliant and experienced trainers, and – most importantly – hands-on training.

While at CSTI, he worked as a crisis Public Information Officer during three major earthquakes, two major urban/wild land fires, a statewide flood, an oil spill off the Ventura coast and a biker rally in Hollister. The real-life lessons learned during those disasters were integrated into the training.

He retired from CSTI in 2002, and created Media Survival Group, where he continued to educate public-sector communicators on the “how-to’s” of effective crisis communications.

Cowan learned the basics of crisis communications during his 21 years of radio and television reporting, including Armed Forces Radio/TV and the Voice of America. He worked at TV and radio stations in Wyoming, Texas and Calif. He also served as a police officer for three years in San Luis Obispo (the headquarters for CSTI). It was during this time that he learned about CSTI and found his true passion – developing crisis communication programs for fellow government communicators.

Today, Frank works as a freelance photojournalist shooting for four newspapers on Central Coast of Calif.

In addition to his illustrious career in crisis communications, Cowan also served as a two-time president of CAPIO and a long-time supporter of the organization’s mission to provided focused education and networking to its members.

CAPIO will begin accepting nominations for the Frank Potter Cowan Crisis Communication Leader award in 2018. Government communicators will have the opportunity to submit for the award on an individual basis or as a team.  The award will recognize the dedication and hard work they invest during times of crisis.

“Whether it’s a natural disaster, act of terrorism, or a reputational crisis in the media, stress levels are at their highest and the most important thing to remember is that we grow and learn from these experiences and we survive together,” noted Brainerd.”